Dedicated to Preserving the History of Worcester, Mass

Although not the oldest building in the city of Worcester, the Andrew McFarland house at 830 Pleasant Street might well be the oldest Worcester structure related to the 1718 Scotch-Irish immigration here.  We have collected some existing histories of the home and are posting them here. We also spoke recently with the current owner of the house who describes what appears to be original framing work in the oldest part of the building.  She tells of finding c. three-hundred-year-old corn cobs up in the eaves of the attic that had been used in early days as insulation material.

Lenox, by local historian Donald W. Chamberlayne (2016), discusses the origins of the McFarland family and their connection to Worcester:

“Among the arriving families was that of Daniel McFarland, age 54, with four sons and at least two daughters, and his brother Duncan. In the genealogical account of the family by Ellery B. Crane there was no mention of a wife. She may have died in Ireland before the family emigrated. The McFarlands settled in Marblehead and remained there for about a decade. The oldest of the four sons, Andrew, born in 1690 in Ireland, was one of eleven members of the Scots-Irish awarded land grants in Worcester in 1718 as part of the Governor’s arrangement with the newcomers. There were at that time, according to William Lincoln, nearly fifty-eight families in the settlement. About 1720, Andrew married Rebecca Scott Gray, who was also from Ireland and who probably came over in the same passage. By 1729 they had five children and were living in Marblehead, with a move to Worcester on the horizon. In 1727, Daniel and his son Andrew McFarland purchased a tract of land in Worcester, which at that time was still in Middlesex County, as Worcester County had not yet been established. From the original deed of transfer:

‘Gershom Keyes, of Shrewsbury, yeoman, sold to Daniel McFarland and Andrew McFarland, both of Marblehead, in the county of Essex, Laborers, Oct. 26, 1727, for two hundred and sixty-one pounds, ten shillings, “a Certain Tract or parcel of Land Situate lying and being in the South Part of Worcester in the County of Middlesex aforesaid containing by Estimation one hundred Eighty and five acres…” ‘

By ‘the South Part of Worcester’ was meant the area that later constituted the town of Worcester (more or less), after the ‘north part’ was removed, in 1741, to form the town of Holden. Subsequent text of the transaction, not shown here, identified bordering land parcels by the name of their owners. From these names it is established that this land was in fact the land on the west side of the south part of Worcester with which the McFarlands were thereafter associated. “

“Located in an area where Daniel McFarland, one of Worcester’s first Scotch-Irish settlers bought land in 1727, the McFarland-Chamberlain House may contain part of the homestead built by Daniel McFarland or by his son, Andrew.   According to Nutt’s History of Worcester, Andrew McFarland lived on ‘the homestead’ on land that he had purchased from his father in the vicinity of ‘Lenox’ (Pleasant Street). Caleb Wall’s Map of Earliest Settlers labels a house in this location ‘Andrew McFarland – 1718.'”

Andrew’s grandson, James (1758-1835) was a soldier during the Revolution, serving in Captain Seth Washburn’s Company (1776), Captain Ebenizer Lovell’s Company  (1777) and Captain Jesse Stone’s Company (1777). James’ son, Ira (1785-1874) is the first person who is known to have occupied the house. Ira McFarland was a farmer; his daughter, Maria, married Ephraim Chamberlain of West Brookfield, who eventually occupied the McFarland homestead.  (Many nineteenth and twentieth century sources identify the building as the Chamberlain House, based on Ephraim Chamberlain’s ownership). Frederick H. Chamberlain, son of Ephraim, was a prominent local attorney and judge in Worcester in the late nineteenth and early twentieth centuries .  Although the younger Chamberlain retained ownership of the house, the surrounding land was subdivided and developed into the fashionable ‘Lenox and Chamberlain Parkway’ districts ca.1899-1920.

The McFarland-Chamberlain House is of the familiar, central chimney, center-entrance, three-window facade type, which was particularly popular in eighteenth-century Worcester.  The depth of the house and location of the chimney on the roof’s slope suggest that the building has undergone extensive enlargement. During the nineteenth and early twentieth centuries, the house had a one and one-half storey wing added to its east and a porch extending across the entire facade.  Based on available evidence, part of the McParland-Chamberlain House certainly dates from the eighteenth century; however, a title search would be needed to determine a more accurate date and to determine its line of descent through the McFarland Family.

Located in an area where Daniel McFarland (one of Worcester’s first Scotch-Irish settlers) bought 200 acres of land in 1727, the original part of this house was built by Daniel or his son Andrew about 1735.

Andrew’s great grandson, Ira (1785-1874) was a farmer who lived in the house and had a daughter, Maria.  She married Ephraim Chamberlain of West Brookfield who eventually occupied the homestead. Frederick H. Chamberlain, son of Ephraim, was a prominent local attorney and probate judge in the late nineteenth and early twentieth centuries.  Although Frederick retained ownership of the house and three quarters of an acre, the surrounding land was subdivided and developed, beginning about 1910, into the Lenox and Chamberlain Parkway districts.

The house is a familiar central-chimney, center-entrance, three-window facade type popular in eighteenth century Worcester.  The depth of the house and location of the chimney on the slope of the roof suggest that the structure has undergone extensive enlargement, such as:  the one and a half storey wing added on its east side; and the porch built across the entire facade, later removed.

This house was lived in and cared for by the members of the same family for over 200 years.

This recent photo (below) shows the home on a spring day in 2018.  It is a beautiful home on a corner lot at busy Pleasant Street on the west side of town.  Driving past the house you will see mainly the shrubs that enclose it on all sides. Pedestrians can pause at the shrub openings, however, to get a good look at the home of one of Worcester’s original Scotch-Irish descendants, a man who arrived on a ship from Northern Ireland in 1718 hoping for a better life. 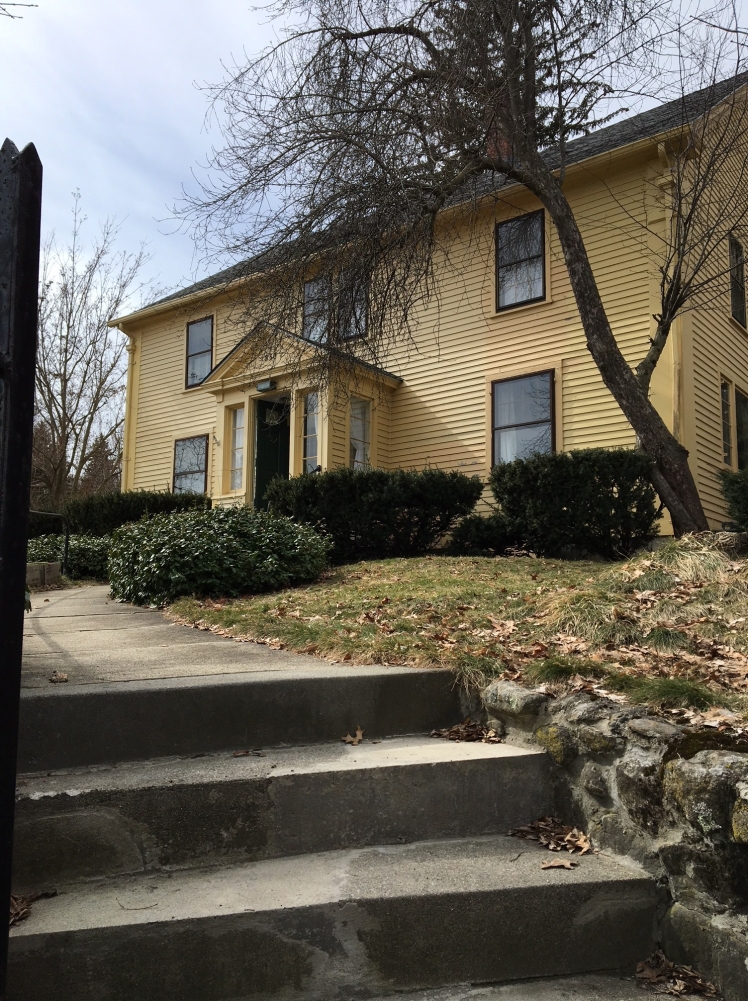 2 thoughts on “The House at 830 Pleasant Street”